EUDEL – the Association of Basque Municipalities is organically structured around a General Assembly that meets, at least, once a year. All the member municipalities of the Association are represented in the Assembly, with their Mayor acting as their spokesperson. After the local corporations have been effectively set up after each electoral process, the General Assembly elects its executive bodies, which are the Executive Committee and the three Provincial Committees (Álava, Bizkaia and Gipuzkoa).

The Executive Committee is formed by a President, two Vice-Presidents  and twelve Members, who shall have the status of representatives of full members. See Art. 17-21 Statutes of EUDEL and art. 21-29 of the Regulations

The Álava Provincial Committee is composed of nine members, elected by the titular partners of the Territory through closed lists. See art. 22 EUDEL Statutes and art. 30-33 of the Local Regulation 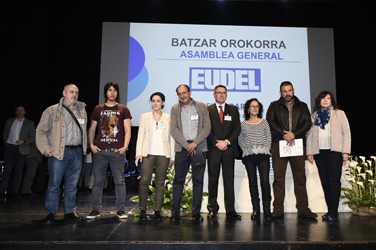